Plenty to Choose From

Museum exhibits, arranged bus trips to the different corners of the vast town (vast meaning in this case area-wise), Zumba lessons, sports camps, theatre performances under the open sky, music festivals for children, moon light swimming, ball room dancing in the wide open – this is only a light scratch from the huge amount of activities that various Salo organizations arrange during the quick summer sea. 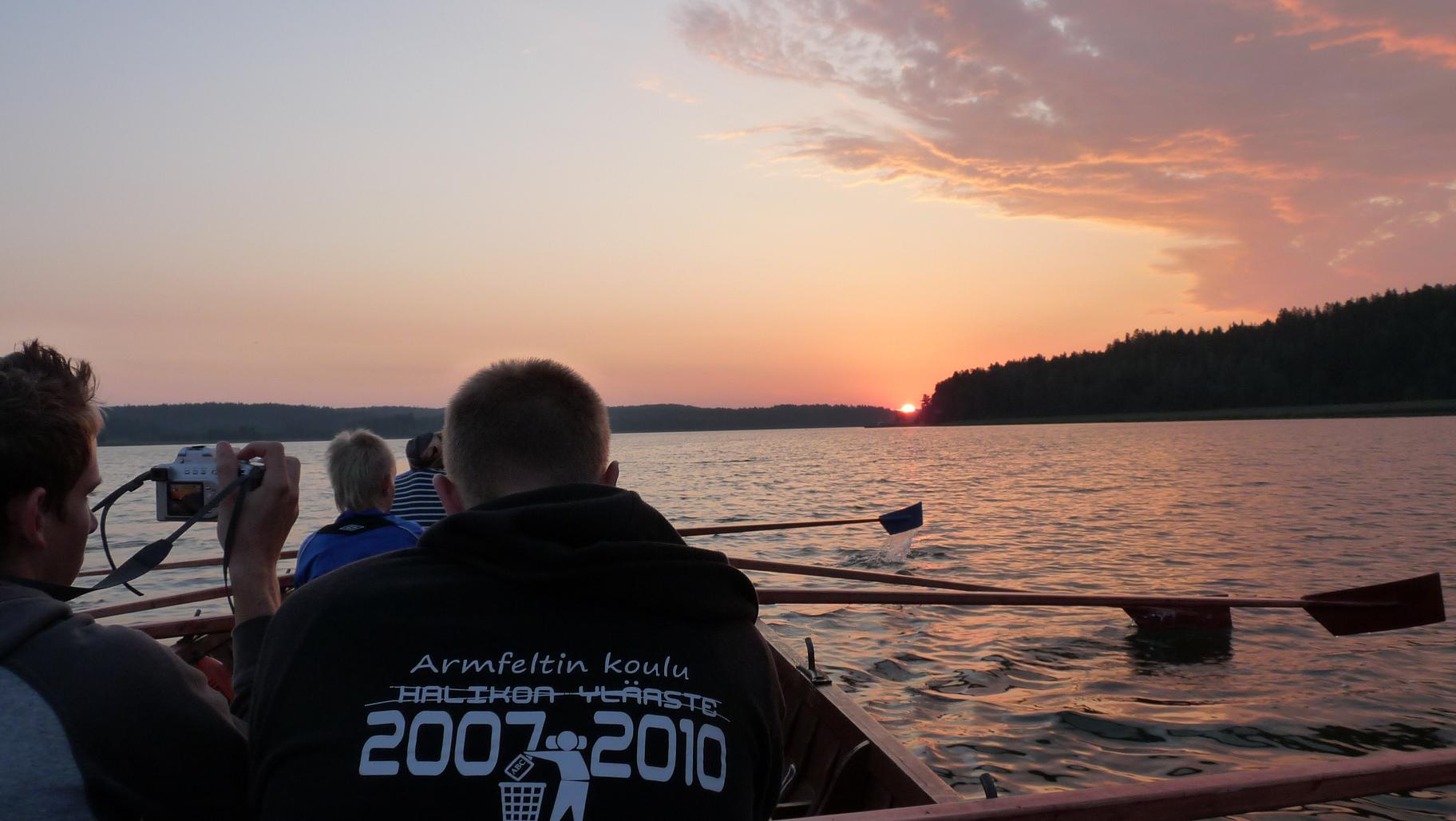 When the day light is at its longest, people also seemto live for the fullest. When the sun is charging us Finns with solar energy for almost around the clock, we just feel compelled to fill the long summer days with all sorts of activities. After all, the winter with its damp and dark months is lurking just around the corner.

I myself took an interest in a boating trip that the local Kirkkovene-lovers www.angelniemenairo.com (kirkkovene meaning church boat) arranged one early morning. The Kirkkovene is a huge rowing boat for twelve rowers slightly resembling a Viking boat but without a sail and the grand and vicious looks. We set up the oars at 4.30 in the morning (and of course this meant I together with my son and our Hungarian visitor had to get up earlier to get to the boat pier in time first!) in order to reach a near-by island out of Salo to see the sun rise.

By that time my boating experience had limited to some small scale rowing in a regular rowing boat. And I had only watched those Kirkkovene boats with great respect from a big distance. Now I was supposed to be part of a  human machinery whose goal was to take the some twelve-meter boat to the wanted direction.

Feeling like an ancient Viking, I together with the rest of the crew put the boat to the seas. The start was slow but it did not take us too long to make the boat fly. Of course, being a beginner and not knowing how to divide the energy resources for the whole trip, I was totally exhausted already half way to the island. I just kept on hoping we would reach the island before I collapsed altogether. 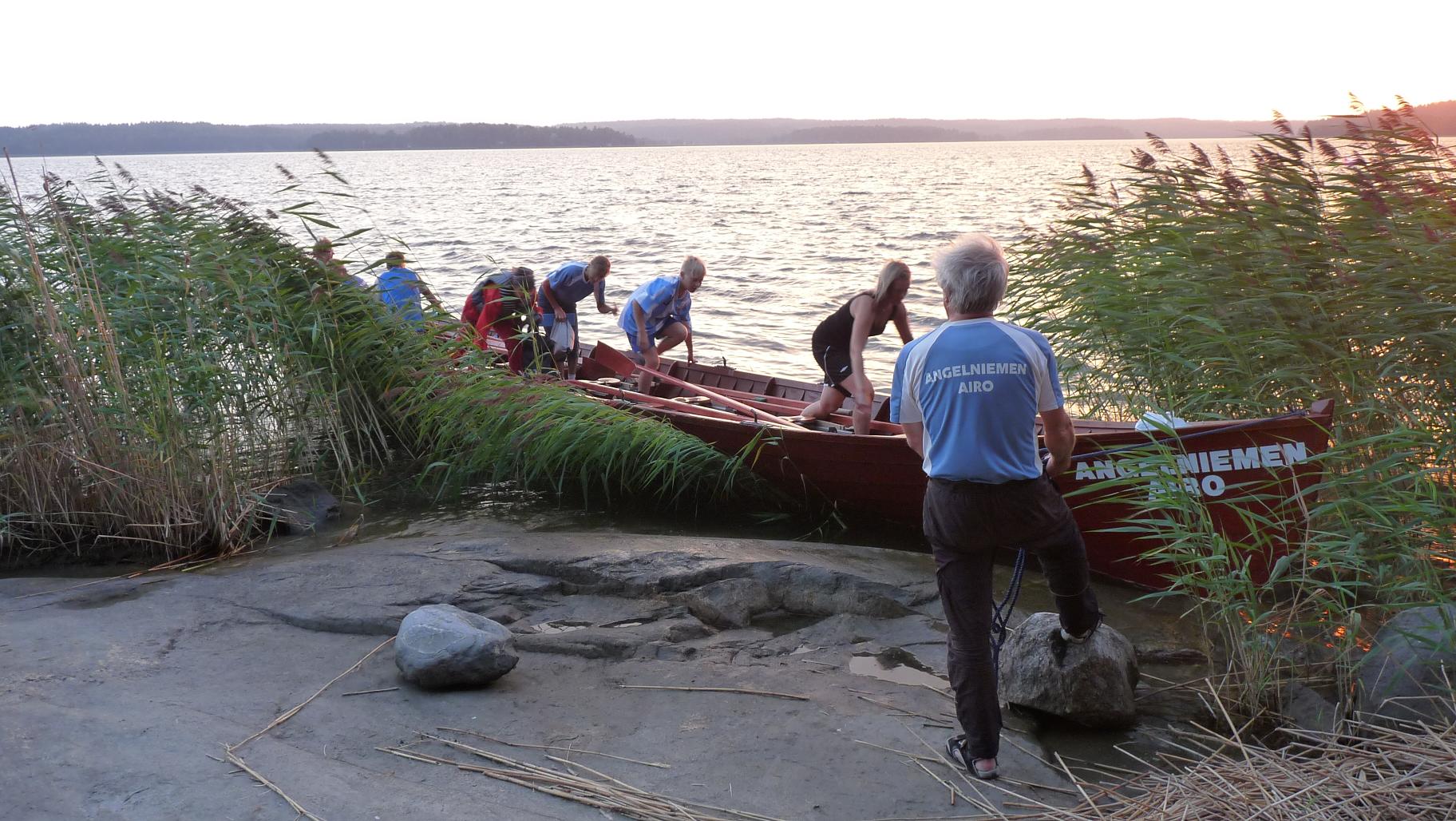 Timing for the boat ride was perfect. After some four kilometres and what it seemed to me after a billion oar pulls we landed on a small island just in time to experience the sun rise with a cup of coffee and some freshly made and still warm delicacy called pulla (a sweet coffee bread made of wheat flour). One of the crew members had already managed to bake it early in the morning before the start!

The Kirkkovene group that was organizing this boating event had just returned from a longer boat trip that they had made in Central Finland. When my heroic rowing only covered some nine kilometres, they had rowed the boat some ninety kilometres in an event called Sulkavan Suursoudut ( http://www.suursoudut.fi/en ) along with hundreds of other rowers.

Powered by the pulla and coffee we turned the boat around and headed back the same route back to the pier. Every single bone and muscle in my body ached when I got off the boat – but I am truly looking forward to the next time the Kirkkovene group decides to do a similar trip!